I made the rich general of “Etchu man or love the beautiful picture" which I adapted Morière’s original, as an Etchu man (Toyama prefecture) and set the dance and music which appears in the original as Owara Bon Dance of the Wind.  This is because I had the following experience.

We saw Owara Kaze-no-Bon that we wanted to see longtime.

The Owara Kaze-no-Bon is held from September 1 to 3 every year in the Yao district of Toyama City, Toyama Prefecture.

We (my wife and I) were invited by the chef owning a French restaurant named Le Jardin des Sens in Toyama City, and got the chance to see an Owara Kaze-no-Bon. The Owner of the building where the Komuro chef has his shop, that is, this landlord, will invite us. Initially, I was hearing Komuro’s tale half in doubt. Because  even though we are complete strangers to him, he’ll prepare a meal for us at the villa in Yao and make us enjoy seeing the play and dance in front of the house. However, we could not such an opportunity for the future that we decided to accept thankfully his invitation.

September 2, 2016, when we arrived at Yao, the gymnasium of the elementary school was set up as a theater for the tourists. People who had enough time for entering and waiting for the dancers to come felt the atmosphere here. 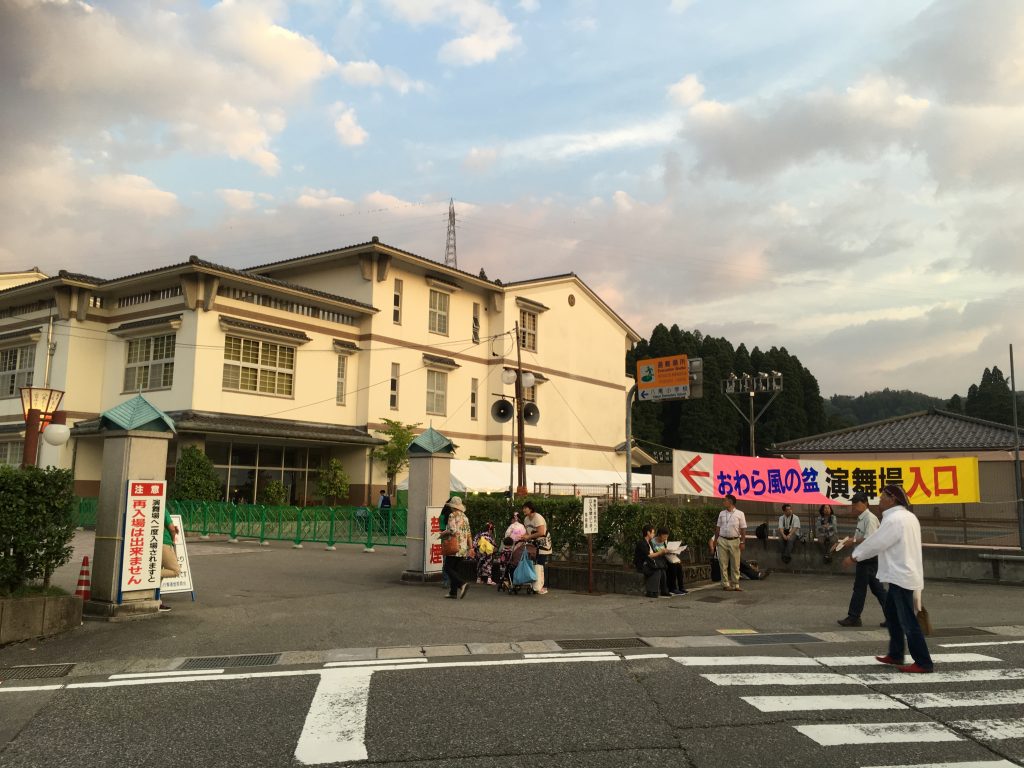 When we walk through the streets we can see the landscape where people crawl for waiting for the dance performance in the streets of dusk. We were also mixed in it and feel the atmosphere of the Owara Kaze-no-Bon festival. 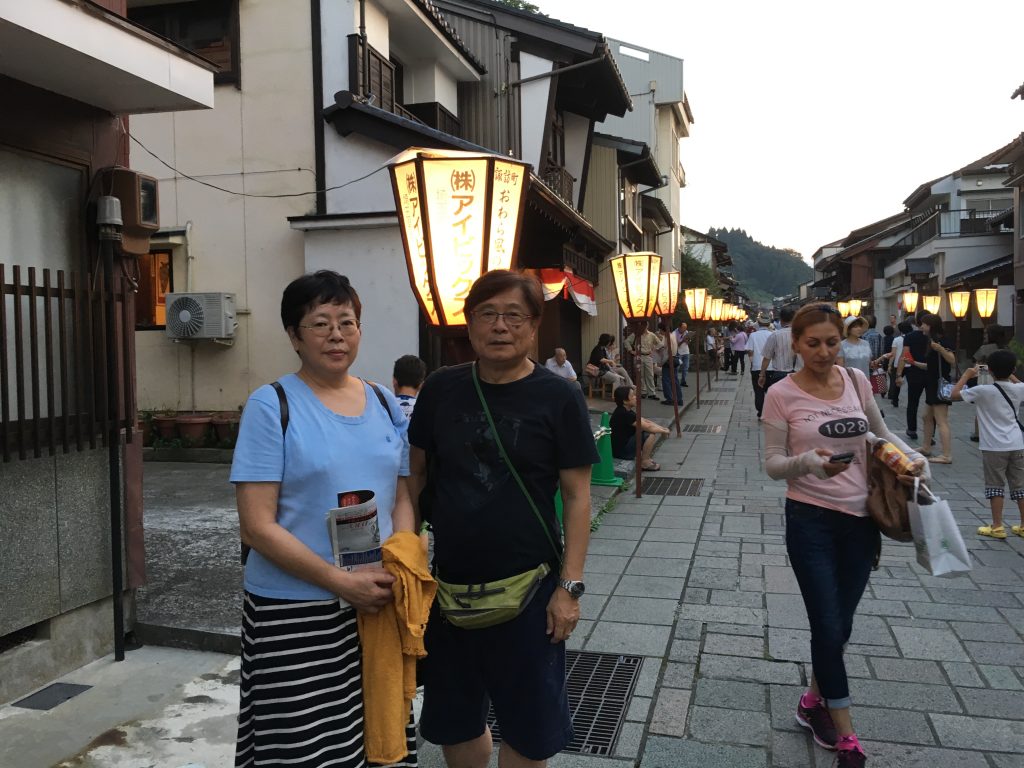 My wife and I are waiting for the beginning of the dance.

The setting sun has come down soon, the atmosphere has risen at last. 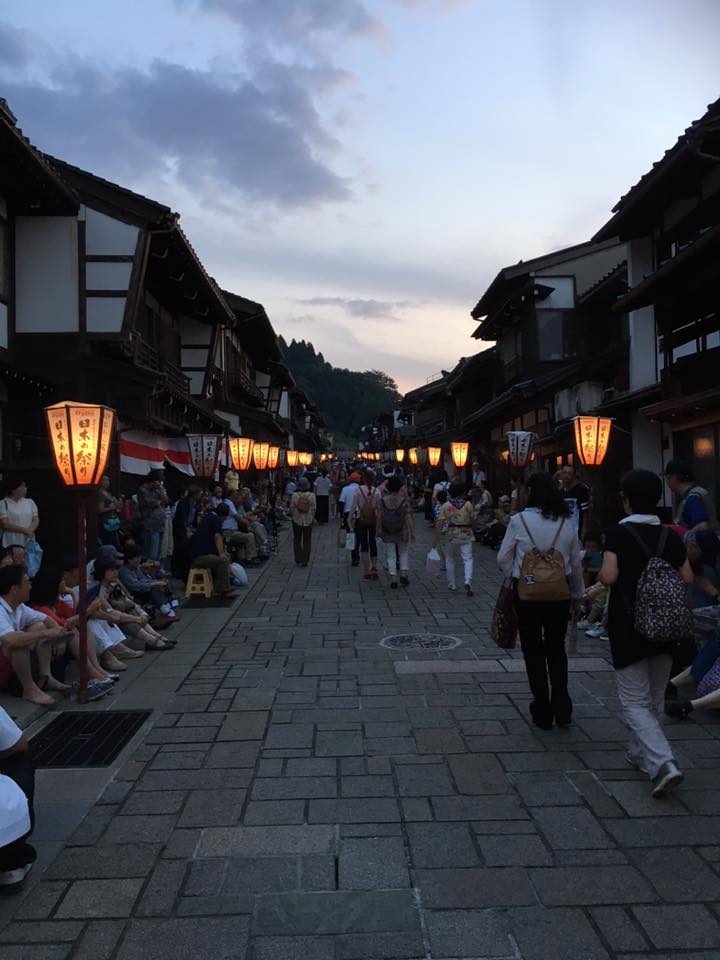 When entering the owner’s villa, inside the villa which he would use only for the time of Owarakazenobon, is decorated by elegant writings and paintings mixed with various furniture items. 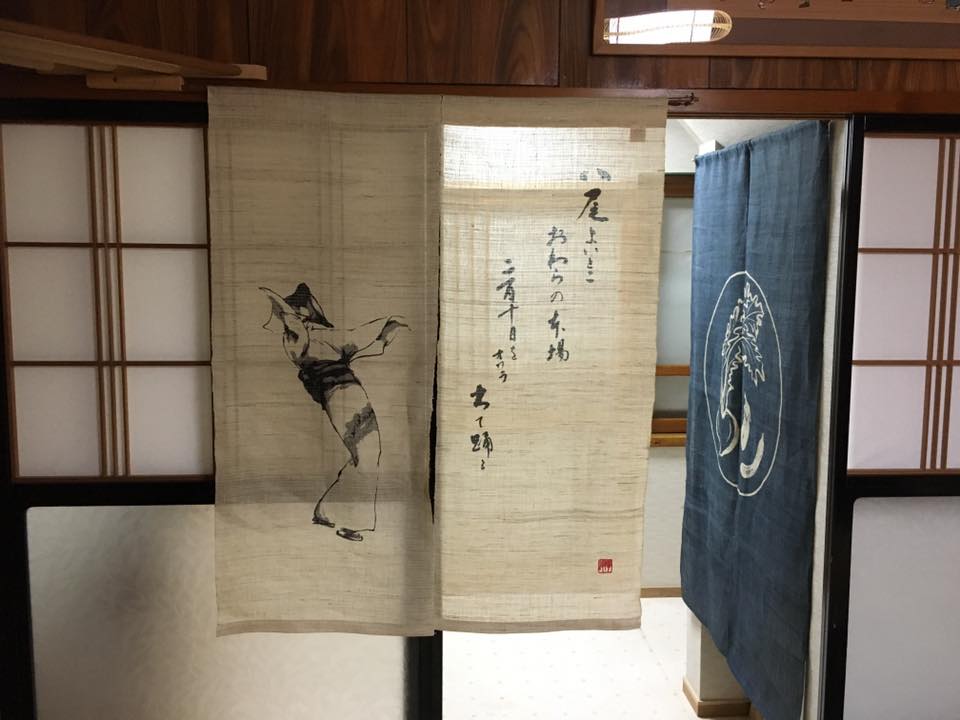 The meal served each person was full of delicious dishes. I just thanked him. 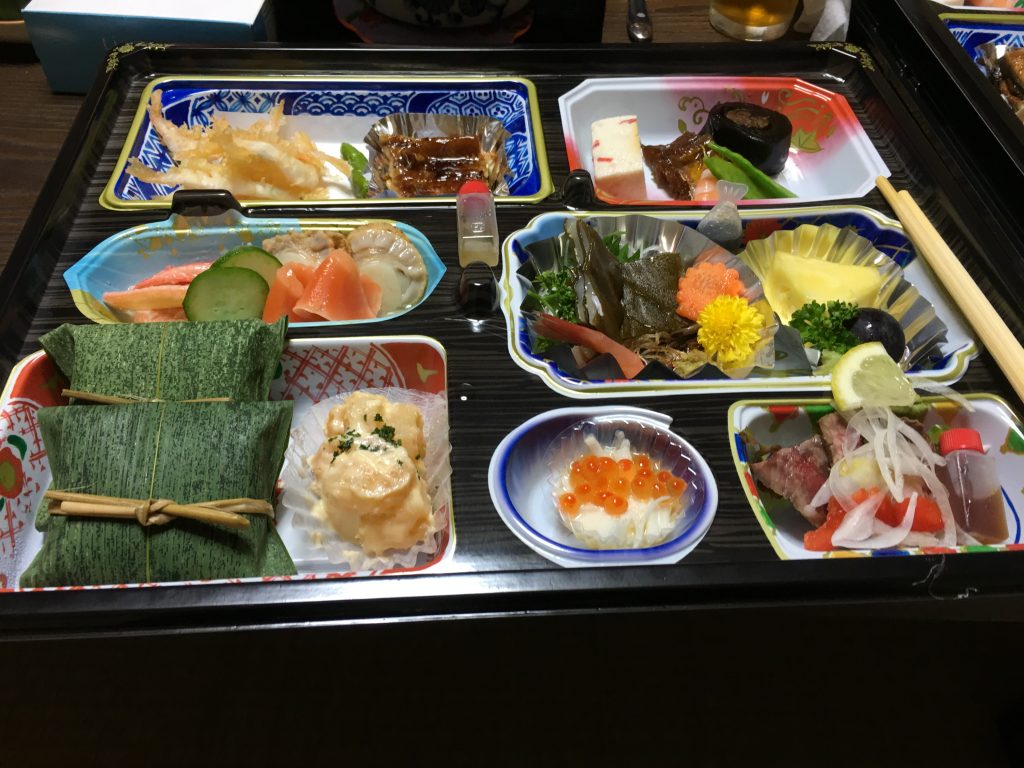 When we are looking at the crowd waiting for the arrival of dancers hearing the music in the distance from the window of the second floor, our expectations are increasing more and more. 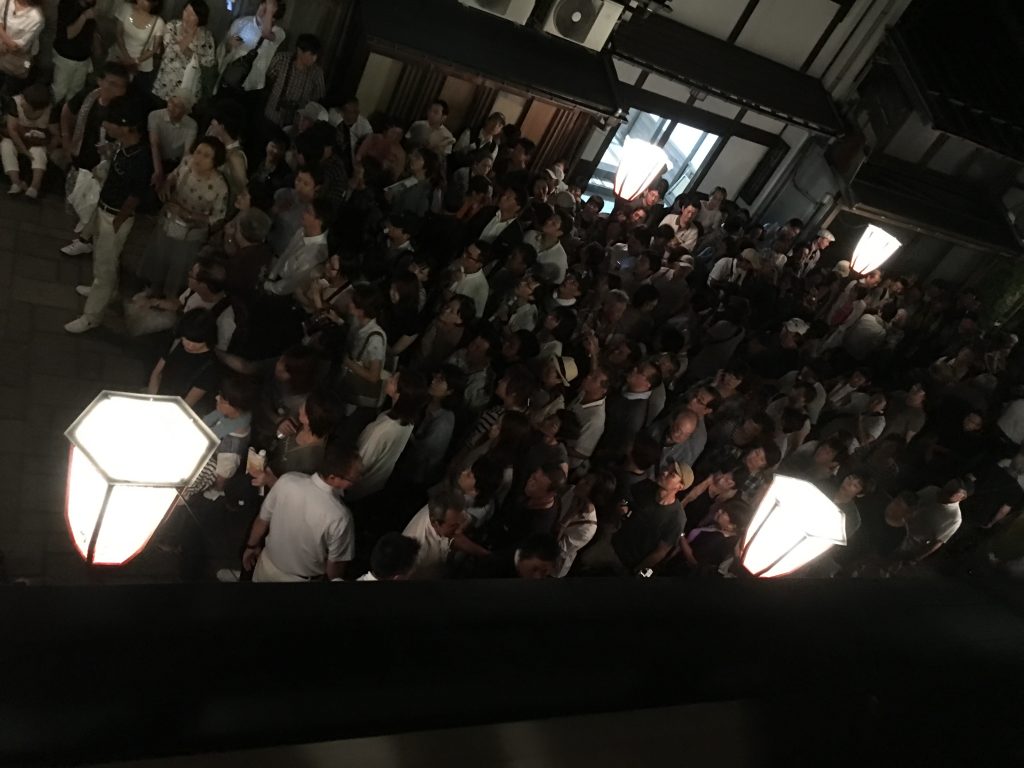 Sitting on the special seats at the entrance, the dancers and players arrived and the performance finally began.

At first it is the men’s dance.

A woman’s dance enters next. According to Wikipeida’s “Etchu Owarabushi" (only in Japanese) , this dance is established as follows.

The new dance is further divided into “men dance (scarecrow dance)" and “women dance (season dance)". The men dance expresses agricultural work, it has a big swing of posturing, they dance bravely and the posturing of women dancing expresses firefly hunting, it is said that it’s good to dance sexily but elegantly. This man and woman’s new dance was choreographed mainly for performing dance on the stage by the Japanese dancer Kichisaburo Wakayagi who had a close relationship with Junji Kawasaki in the early Showa era. He first choreographed a woman dance for geisha who were still many in Yao, then choreographed a man dance. Originally, the posturing of four seasons matching the songs was included only in women dancing (season dance), but in recent years the sexy posturing was put together into pairing dancing with mixed gender. In addition, this posturing has been improved variously in each chônai (neighborhood) of Yao, it is one of the characteristics of Owara kaze-no-bon. (translated by me.)

That I want to first say, is that Owarakazenobon is totally different from the Bon dance performed elsewhere. Feature of the normal Bon dance is that anyone can dance this group dancing. On the other hand Owara Bon Dance is only performed by experienced dancers. Because it is a very high performance not to be able to dance by amateurs who learned the basics.

The complexity of the choreography of the man dance, especially in the difficulty of posing and timing. The delicate gap and feeling of strain between the pose and the musical accompaniment would be the truth height of this dance. In addition, at first glance gesture such as robot, it is apart from original Jiuta Mai and Japanese dance, it would be a kind of  ningyoburi (acting like a puppet)  technology.

I think that woman dance still uses the original behaviour of the Japanese dance. However, The choreography of maintaining the attitude averting the upper body behind is a unique choreography of Owara Bon Dance. Both men and women, hiding in Amigasa the face in the same style perform group dancing. This style make me to think the contrast with the West of masked ball.

Through this experience, I thought whether I could do the same thing by changing my position, I admire heartily what a generous person a wealthy man of Ecchu Toyama is.

About batch processing to convert a large number of image files to text using GoogleDrive's OCR function
Next
"The time retrieved"- About Nancy, a sister city of Kanazawa
Prev

The first sound recording source in the ...