Adapted by Moliere's original  “The Sicilian, or Love the Painter“

To purchase a printed book (print on demand), click on the image below to jump to the URL 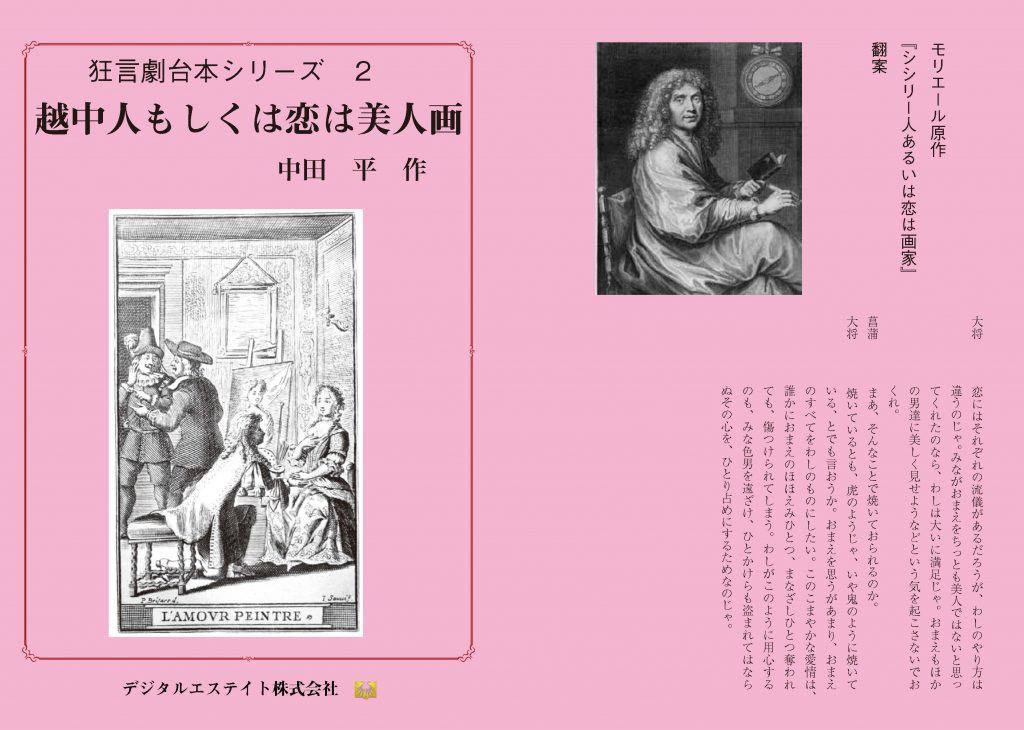 “Etchu man or Love the beautiful picture” is an adaptation of “The Sicilian, or Love the Painter" of Moliere, French playwright and theater organizer of 17e century, in  order to revive it in the traditional Japanese performing art  Kyôgen.

Young samurai has come to love a woman, he get his vassal Taro Kaja into trouble by imposing troublesome things on him. Young samurai is in love with Ayame kept by the General like a mistress, but it’s impossible to get an opportunity even to talk to her because the general always surround her, That is a great annoyance for him. So he let Taro Kaja to bring a troupe of Owara Bon Dance of the Wind in order to lure Ayame to come by playing music in front of the house.

The troupe began to sing and play instruments, but it’s the general himself rather than Ayame that came out in the night of darkness. Taro Kaja and the young samurai discussed stratagem not noticing that General was listening them. General who knew the trick tried to take Ayame away, but she refused him. Ayame was freed from slavery by General, but she can not stand to be the wife of General more than the slavery.

Since Karaku, his old acquaintance, a painter of ukiyo-e was supposed to draw a portrait of Ayame, he decided to come pretending to be a Kaga samurai good at painting as his substitute. Taro Kaja hearing it goes away for the preparation in order to execute the plan.Young samurai pretending to be a painter was fairly cheated the general and succeeded in meeting the Ayame. Taro Kaja pretending to be a Bando Warrior came and started talking to the general in consultation. Taking a chance, the young samurai confided his real motive to Ayame, and gained her consent.

Young samurai left rounding up painting the portrait, there appeared Ruri wearing a costume with hood, asked him for help, because she was chased by her jealous violent husband. General has been harboring Ruri to home, but after knowing that her violent husband is Kaga samurai himself, soothe somewhat Ruri while surprised. Although he watch after Ruri who comes out wearing a costume with hood counseling to her reconciliation with husband, the woman with the hood costume was Ayame. General deceived is appealing to the court, but the judge is busy for preparing Owara Bon Dance of the Wind, don’t deal with him. So dance begins, this is the finale.