“Suppa’s Deceits" is the adaptation of the comic play “Scapin’s Deceits" by Molière, French actor, playwright and theatrical organizer in the 17th century to revive it as a piece of Kyôgen, traditional Japanese art. The adapter equates the servant Scapin to Suppa, famous trickster in Japan in the period of war and reveals Taro Kaja and Jiro Kaja. 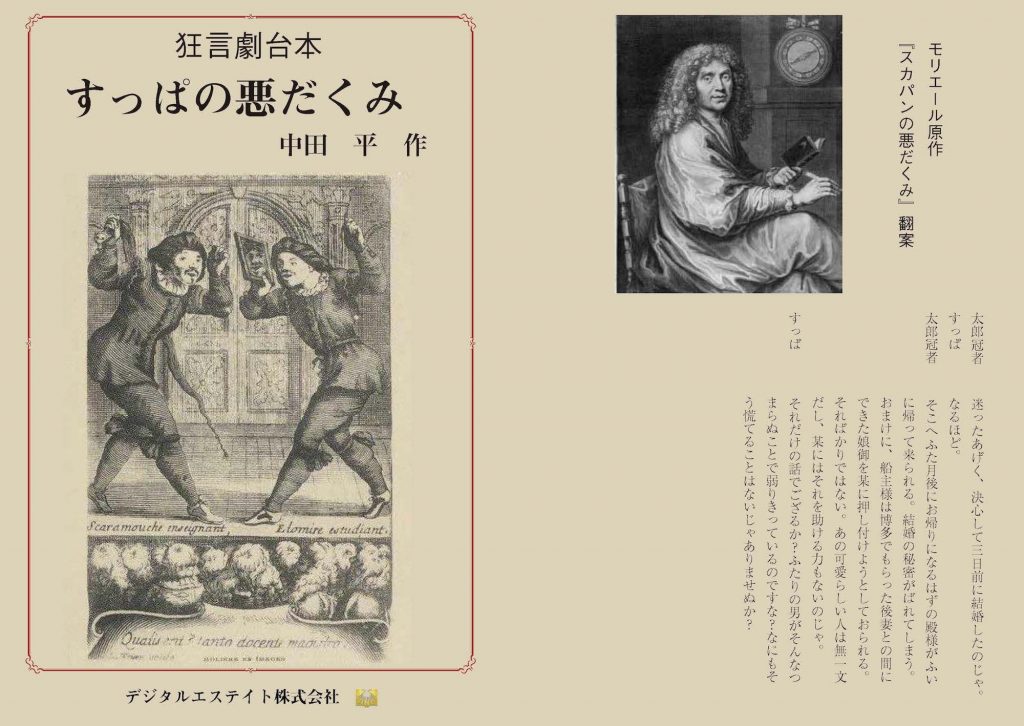 At the time of Momoyama (1573 – 1603). Hideyoshi Toyotomi built the castle of Osaka floating in the Yodogawa River, at the corner of which there is the tower of princesses prohibited to men.

The Daimyo [local lord], the master of vassal Taro Kaja had gone to the voyage by the ship two months ago with the shipowner, the master of Jiro Kaja. Taro Kaja learned they return, interrupting the journey. It is really embarrassed that his master will marry the shipowner’s daughter, because he secretly married the woman called Ruri. Suppa entrusted by Taro Kaja, trying hard to persuade the daimyo goes without being convinced. Jiro Kaja appears at this time.

The relationship between the shipowner and the Daimyo has fallen dangerous, because the marriage of Taro Kaja was disrupted. The shipowner ordered Jiro Kaja the confinement for harassing questions, refusing his flattery.

The Daimyo is furious to hear the unreasonable sum of money for consolation fee for settlement negotiations with Ayame’ brother. Jiro Kaja  who dressed as a swordsman comes in there. The daimyo surprised by threatening attitude of the opponent who wields the sword, is obliged to pay money to life with regret.

The shipowner appears there in the scene.

Suppa simmering him a story that Jiro Kaja lightly mounted in the ship for India is demanded a ransom for a large sum. He managed to swindle money from the shipowner.

Ayame in the hope that her marriage with Jiro Kaja is officially allowed, that is the same fate as Ruri married with Taro Kaja. However, although Ruri is of good birth, Ayame is an orphan.

Suppa blows him a lie that the brother of Ruri is the professional killer seeks the shipowner who tries to divorce Ruri with Taro Kaja for marry his daughter. The lie is revealed before long.

The shipowner and the daimyo demanded a hue and cry to avenge Suppa, but are informed that Ruri, the daughter of the shipowner was dead by boat travel distress from Hakata to Nanba.